5 Best Board Games Like Monopoly To Play With Your Friends

Are you looking for the best board games like Monopoly to play with your friends or family in your spare time? If yes, you have arrived at the right place to get some exciting board games similar to Monopoly!

Gaming has been one of the most popular sources of entertainment not just today, but centuries before the birth of Christ, as old as 5000 BC. Since then, gaming culture has evolved a lot.

While the early men used stones and markings to play games, it later evolved into dice, boards, and cards. One of the most popular board games, chess, was also discovered in India.

Even one of our major ancient epics, Mahabharata, describes a match of a board and dice game between the Kauravas and Pandavas. While digital gaming and video games have gained traction over the past few years, board and dice and card games are still popular.

Before getting into the Monopoly like games, let me tell you a few words about it!

One of the most popular board and dice games, for many years, is Monopoly, published by Hasbro. It has been licensed locally in more than 130 countries and translated into more than 35 different languages.

Monopoly is derived from “The Landlord’s game,” created in the United States, aimed at promoting an economy that valued wealth creation rather than promoting monopolism with a few conditions.

A monopoly consists of two dice, a board, currency, cards, and several other things and can be played by two to eight players. The main aim of players playing the game is to prevent himself from insolvency and, at the same time force opponents into bankruptcy by buying and developing pieces of property.

The Monopoly involves trading and buying property and developing properties with houses and hotels. A player collects rent from his opponents, intending to drive them bankrupt. Players can gain or lose money also through tax squares and community chest cards, and can even land in jail. The game involves several house rules and variations, thus making it so accessible.

5 Great Games For Monopoly Lovers To Get Maximum Fun 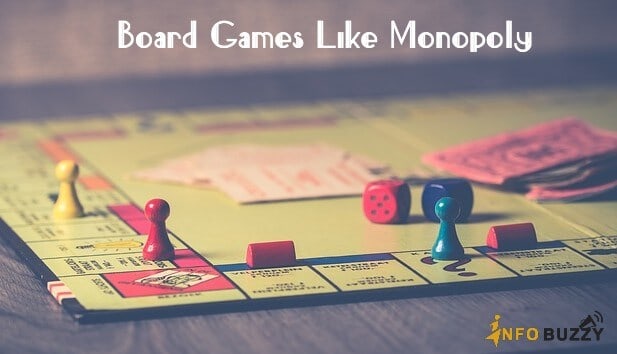 One of the popular games like Monopoly is Power Grid, which is the English version of “FunkelSchlang,” a German-style board game. The players in this game compete with each other to purchase power plants and expend their power supply networks into more and more cities and also buy enough natural resources to generate power for supplying.

Power Grid is a game similar to Monopoly that simulates the demand and supply forces of an economic system. It includes an auction round in which players pit against each other to get their hands on the latest technology for the power plant.

This board game is not only fun but also very educational, which teaches the underlying economic forces and environmental concerns, thus creating new situations to deal with.

Pirate King is another new card, dice and board game similar to Monopoly, released by Temple Games in 2006. Pirate King is a strategy and action base board game like Monopoly, in which players compete to gain control over the seas, for which they find hidden treasures, capture islands, and improve them.

This Monopoly like game is an improved version of a classic strategy based Monopoly like games and blends adventure and excitement. In this game, as players, or pirates, in this case, sail through the Caribbean sea, capturing islands and building fortifications, while finding hidden treasures, getting men and equipment for their ships, to rule the seas.

The game Pirate King is packed full of goodies, round cards representing your ship’s crew with color portraits of the members, actual glass gems and a little pirate chest for keeping the gems in, thus adding a more colorful and vivid playing experience.

This is another popular game like Monopoly, with setting in the real-estate world of Atlantic City in New Jersey. This game involves building hotels, constructed by various players, and contain markers indicating the number of floors of the hotel.

Although Advance To Boardwalk is not a game similar to Monopoly, the sheer genre would make you fall for it if you are a monopoly lover. The theme of property acquisition. It is just a simplified area control game, in which players have to control maximum properties on the board.

Opponents can take over a hotel by building more floors to an existing one and thus gain benefits for controlling the majority. The game ends when players run out of properties to build upon, and the player with the maximum property value wins the game.

Ticket To Ride is a popular German-style board game similar to Monopoly. Ticket To Ride has also acclaimed many awards as the best game in America and Europe. The game is a cross-country train adventure in which players collect and play train cards with colors matching the railway routes and claim the routes to gain points.

This board game like Monopoly is railway-themed, but a fun and strategic game like Monopoly. Points are acquired by claiming train routes and more if the routes are longer. Players gain more points if they connect cities with their trains. Every turn, the player decides if he wants to claim a route, place a train station, take more destination tickets, or add more train cards.

Each turn forces a player to balance greed- of adding more cards, or fear- of losing essential routes to the opponent. The game continues until one player has only to train pieces remaining, after which points are summed up, and the player with the highest point wins.

Well, who doesn’t love all those cute and powerful creatures that made our childhood memorable? Yes, I am talking of Pokémon, who all of us wished to have. But did you know that there’s a player versus player, a digital board game called Pokémon Duel that allows you to fight battles with Pokémon all you want?

Pokémon Duel is a strategic digital board game like Monopoly, which lets you collect Pokémons, deploy them on the digital board, and move them to your opponent’s territory before he does.

A monopoly is a game based on strategy and economic forces and allows the player to develop strategies all the while learning and to have fun. So do the other games like Monopoly, the ones described in this article. Get the best one to play with your friends in your free time.

Nirmala is a dedicated blogger who has been in the Blogosphere since 2012. She is a tech freak and thus she loves to write about the innovative matters of technology.
Previous Best 5 3-Player Board Games For Maximum Fun
Next List Of 10 Best Marriage Video Mixing Software