Board games are fun, aren’t they? And if you have siblings and cousins around, they possibly can be the best way to enjoy yourselves up to the fullest.

Here, in this article, we would be discussing some of the best 3-player board games which you can enjoy with three or more participants. So here are a few board games that you might love playing!

Best Board Games With Family At Spare Time 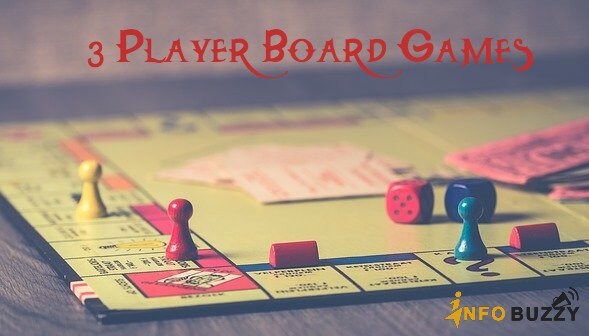 Are you and your pals’ strategy game lovers? If you are, then Suburbia is the game that you might have been searching for all this while. The enticing game allows you to develop a metropolis.

The board game comes up with hexagonal-shaped tiles that represent various building types out of commercial, residential, and industrial. Be very sure that you do not stuff your land with a similar set of tiles, or you might fail to woo in the best parts of the population.

The trick in this game is to strike the perfect combination of these tiles. Make sure that the residents of the place do get all the amenities in the precisely correct proportion.

The 3-player board game is exciting and its recommended that you play this with at least three players, so that it strikes the perfect chords of the game.

The perfect game for a group of 3. Thrilling, adventures, and purely entertaining. Possibly that defines the game at best. You might have thought that the same is possible only in the video games, well that is not the case, things can get thrilling in real-life too! Let’s check out some of the rules of the game that would help you win the battle.

The rules of this game are pretty simple, and you would have already played video games on the same concept. This 3-player board game is all about being a brave thief. Yes, you read it right, you need to be a thief and do exactly what thieves do. Steal!

You will have to steal all the valuable treasures and then get out without being caught. Once you think you have collected enough treasure, you would now have to strictly adhere to the rules of the dungeon and be as quiet as you possibly can.

In case you fail to adhere to the rules, you might face the consequences. If you are a group of 2 to 4, then this board game would keep you well entertained and occupied.

Do you love decorating your place? If you are your friends, have a bit of knack towards designing and some colorwork, well, this is the best three people board game around for you in that case. The rules are simple, the road to success too is simple, but then when you get in the game, things do get interesting at times.

The game has an interesting bit of history associated with it, without which this game would seem a bit meaningless. Thus, to put it in short, the Portuguese king, Manuel I, was awestruck by the beauty of the Alhambra palace in Southern Spain. The beauty of the palace had stroke him so hard that he ordered the replication of the same in his palace.

Now coming to the game, every player in the board game are expected to decorate the palace for the king! Well, you might take pride in that for sure.

In the 3-player board game, you would have to collect colored tiles from the supplier and thus decorate the palace. The players are awarded points based on how they have placed the tiles for the decoration. Two to four players, above the age of 8, can play the game.

This board game never gets too old. Whether you are in college, in high school, or just chilling out after your job, this probably is in the list of your favorites. The game is easy as you possibly know all the rules, challenging if you have a poor vocab and everything in between!

The good old classic scrabbler game rules remain the same. You would have to think of a word, get the letters that you might need for the word, and form the word. The twist is in the details as they always are.

Although it seems easy this way, then you need to make sure that the word that you build is with the help of the existing words on the board. Challenging, isn’t it? Well, that is just why this 3-people board game has been able to keep up with the popularity even today.

As you know already, you possibly can have any number of players playing the game, but three players is that sweet spot where you are not too many, nor too little to count.

3 Player Board games are not always about defeating others. It can also be about winning with others! Forbidden Island is one such 3-player board game where it is not about beating others, but about winning the battle with all your mates. Let’s see if you and your friends can abide by the rules to win the game!

Collect as much treasure as you can with your pals, till the island sinks as a whole. It’s an easy game. Play to collect treasures with your pals. the game takes less than 30 minutes. Yes. Thirty minutes is all that you would need to play one round of this game. Thus, this possibly suits to be a party game.

Even in this case, the board game can be played by 2 to 4 players. However, it is the most exciting for a group of 3.

Here, I have tried to list down a few board games that you can play with three people. I have covered all the genres possible so that you can choose the perfect one that suits you the best. I hope that you have a good time enjoying these 3-player board games with your pals.

Nirmala is a dedicated blogger who has been in the Blogosphere since 2012. She is a tech freak and thus she loves to write about the innovative matters of technology.
Previous How To Download Xbox 360 Games For Free?
Next 5 Best Board Games Like Monopoly To Play With Your Friends