Looking for the best games like RimWorld to play the construction and management game in a better way? Check RimWorld replacement games to choose and play the game of your choice.

Nothing gets better than a sci-fi themed game. One such game was RimWorld. For those who don’t know what RimWorld is, RimWorld is a single-player construction and management game.

What forms the plot of the video game?

Humans are stranded on an unknown planet (RimWorld). The goal of the game is to gather and develop as many resources as possible. 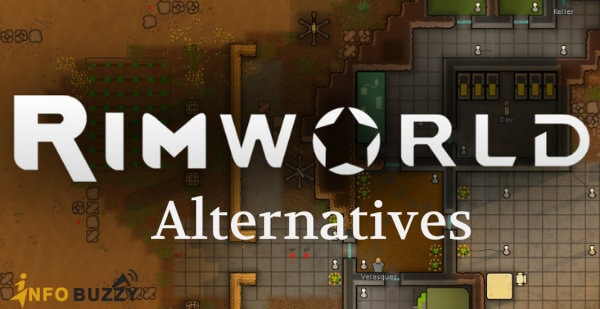 Dwarf Fortress shares quite a lot of similarities with RimWorld. But unlike RimWorld, the theme is fantasy in Dwarf Fortress.

It has two primary modes: Dwarf Fortress mode (which involves constructing an underground dwarf civilization and protecting the inhabitant dwarves from goblins) and Adventurer mode (which involves exploring the land, raiding abandoned settlements and completing quests).

This RimWorld replacement offers better graphics than RimWorld, and many consider the game even better. However, it comes at the cost of having more complicated gameplay slightly. One needs to be able to master the controls of Dwarf Fortress to be indeed able to enjoy it.

Judgment (Apocalypse Survival Simulation) is a survival simulation game. This is quite an exciting game and follows a mix of both science fiction and fantasy. It involves helping the player’s colony of survivors thrive in an apocalyptic, demon-infested world.

Like RimWorld, Judgment (Apocalypse Survival Simulation) calls for resource construction and management. It also requires the colony members to protect themselves from attacking demons.

The climax of the plot is to stop the ongoing demon-invasion apocalypse. To prevent the apocalypse, the in-game characters need to research for a way to close the Hellgate through which the demons are entering the world.

It is a hit among fans of apocalypse survival games. It involves quite a lot of challenges which the player needs to complete to obtain resources, level up, and unlock specific resources or abilities.

The game has much better graphics and an engaging story arc, but some may not like its slightly cartoony art style. Nevertheless, Judgment (Apocalypse Survival Simulation) is the game that you need to be playing right now.

Civitatem is a developing game that offers a lot of promises. It is one of the excellent games like RimWorld that has a top-down view approach. The art styles of Civitatem are also quite similar to RimWorld. But the similarities end there.

Civitatem is a journey through medieval times. This is both a city builder game and a resource construction and management game.

The RimWorld replacement follows no main plot, meaning that it has no end. It is a fun diversion from plot-based games. Another exciting aspect of the game is that it involves a bit of reality. It includes changes in seasons. This affects the entire gameplay.

Crops can be grown and harvested during the spring. During winter, the animal hibernates, and crops cannot grow, meaning a food shortage.

The game is quite challenging and calls for a lot of strategy formulation. Moreover, it also requires the player to protect the villagers from external threats.

It is still in development and hence does not have as much functionality as RimWorld or Dwarf Fortress. But it sets high expectations for those who have taken a liking to its initial version.

Nowadays, dungeons are the stuff of myths. One can only imagine how a dungeon must be. But now, with Undermaster, explore dungeons and more!

This similar RimWorld game allows its players to not only explore dungeons but also decorate them and construct their world in it. This is a role-playing entertainment.

But it also allows players to control mythical creatures like trolls, goblins, and imps to do their bidding. Fight monsters and talk to magicians. It is the ultimate fantasy adventure!

Unlike the previously mentioned plays on this list, Undermaster takes a funny approach towards the genre. It has funny and weird-looking creatures. It is light-hearted, even though the nature of the characters it deals with.

In Undermasters, players can populate their dungeons with various creatures, have these creatures make products, and then trade the commodities. Players can also form friends, visit their friend’s dungeon and help them at performing specific tasks.

Are you bored with apocalyptic survival or fantasy games? Do you want to play something more interesting? Are you looking for realistic science-fiction games like RimWorld?

What you might be looking for maybe a video game based in space. If that is the case, what you are looking for is Planetbase. This RimWorld alternative is a simulation recreation that involves building space colonies.

Explore four different types of plants: the desert planet, the frozen planet, the gas giant moon, and a storm planet. Each planet poses its level of increasing difficulty.

Starting with a few colonists, create the environment required for the colonists to thrive and multiply. Expand your colony size, construct more structures, develop resources needed for living, and experience what life at space could be like.

To make things more interesting, the developers of Planetbase included weather changes and disasters that affect gameplay and intruders attacking the player’s colony. Build cities in space only at Planetbase!

The RimWorld like game has a very serious setting: 4 colonists survivors are lost in unknown space. As they venture deeper into space, they need to build their starship, develop it, create necessary resources, and research new technology.

As the survivors’ journey through space, they need to be prepared for all the horrors that they could face while at space, collisions with asteroids, manage heat levels, evade the heat from nearby stars, and protect their spaceship and resources from opponents.

It also allows for trading with neutral spaceships and mining asteroids for minerals. Research new technology, expand your spaceship, and unlock new weapons. Do everything that you can to survive on a spacecraft lost in deep space.

Spacebase DF-9 takes construction and management, and survival on a spaceship to an entirely different level. This is a similar game like RimWorld.

Apart from the usual spaceship size expansion, technological development, and resource management, expect the unexpected! Alien encounters and so much more that won’t be found in most other games!

Spacebase DF-9 has better graphics and exciting characters to play with. Interact with aliens or battle ones that try to attack you.

It is one of the exciting games like RimWorld that has a fantastic music system with realistic sound effects. One can expect realistic gameplay. Spacebase DF-9 is the ultimate science fiction space game!

Decorate your spaceship and assign duties to every citizen of your spaceship. Fend of aliens and parasites and research medicine and technology.

Craft The World is the ultimate craft and construction game. Explore a mystical land. Build bases both above ground and underground.

Decorate bases and enlist help from citizens. Battle different animals and monsters. Research technology and craft a variety of tools.

This is the best RimWorld alternative that is quite similar to Dwarf Fortress as it employs the sandbox approach. But it has impressive cartoony graphics and a 2-dimensional approach, unlike the top-down approach of Dwarf Fortress and RimWorld.

Craft The World is best for entertainment that incorporates all of the best features of Dwarf Fortress, Terrarria, and Dungeon Keeper. Explore a variety of different worlds of increasing difficulty levels.

Another plus is that the game is frequently updated, and bugs are fixed to ensure smooth gameplay. Craft The World also has a very active community.

Top 5 Features Of Craft The World

Evil Genius is a three dimensional, top-down construction and strategy amusement which is an excellent RimWorld alternate. It has a gripping and unique plot. The player is an evil genius and has to construct a secret evil lair.

He needs to create his economy and empire with his henchmen. This game, like RimWorld, also needs to research various technologies to help him take over the world, all while hiding the exact location of his base.

Choose from 3 Evil Geniuses and begin your quest for power. The player needs to conduct various evil missions and needs to keep away do-gooders trying to identify or infiltrate the evil lair.

This means that the player needs to conduct covert missions to stay out of the sight of do-gooders and set up traps to keep them away from your base. Test weapons that you plan to use to take over the world.

It incorporates cartoony visuals and lots of humor. This keeps the gameplay interesting and engaging. Take over the world and establish your ‘Acts of Infamy’ only with Evil Genius!

Keep a lookout for a sequel to the game titled ‘Evil Genius 2: World Domination’, to be released sometime in 2020.

Prison Architect is a two-dimensional construction and strategy recreation. It resembles the plot of the Sylvester Stallone starrer ‘Escape Plan’ series.

This RimWorld substitute requires the player to create the best prisons. The style of the game draws similarities to RimWorld, but Prison Architect creates its footsteps.

Prison Architect offers interesting gameplay. Apart from constructing the ultimate and inescapable prison, the players also need to concern themselves with the welfare of resident prisoners and wardens.

Failure to do so could result in prison riots. It has two modes: a Story Mode and a Sandbox Mode. This RimWorld substitute is at a league of its own. Have fun playing the incredible unique Prison Architect!

Fear not gamers as there are many games like RimWorld that are available. This list describes 10 of the best, each unique in its way. Pick your choice and get gaming!

Nirmala is a dedicated blogger who has been in the Blogosphere since 2012. She is a tech freak and thus she loves to write about the innovative matters of technology.
Previous Get Your Business Online With Linux Hosting By Hostpapa
Next Best Email Marketing Services For Small Businesses To Get in 2020