Are you looking for the Games like Skribbl.io to play in your spare time? You have reached the right place to know some best browser games to get maximum fun and entertainment.

Playing games online can be fun. Knowing the same, there are various online browser games. One of the most popular among similar types is skribbl.io. If you have played it, you would know that it is a great game that would keep you occupied.

However, playing the same game over and over again seems a bit too boring. Thus, we would love to help you with a few alternatives that you can check out when you are bored with skribbl.io.

Skribbl.io is an online browser game. Its simple, exciting and at the same time educative. The rules of the games are simple, and that is precisely what would keep you involved in the game. In this game, various people from across the world join a single game.

One among the lot would get a chance to choose a word and accordingly scribble on the board. The person who picks the word will have to scribble in such a way so that the others can guess the right word within a given time frame. Once done, the opportunity to scribble would now shift to another person playing.

This process would go on in various rounds until the game ends. The winner would be decided by the person who has the highest points. The most top scores in each round are awarded to the one who gives the fastest correct answer. Enthralling right?

Well, would you want a few more games Like Skribbl.io? We are sure you would love to. To help you out with the same, we would like to introduce you to a few similar games which can act as an alternative to the game in various ways. 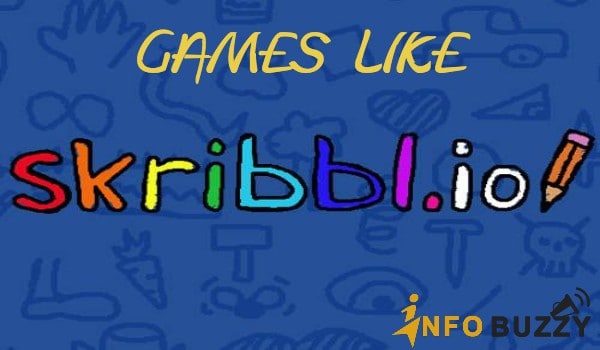 Gartic.io is one of a similar game like skribbl.io. As the gaming format is very much the same. User needs to register into the game by enrolling in their name along with the language they want the word to be. One by one, every user will be drawing the word that they have selected. Others will be guessing the word. The first player to achieve the goal of points will be declared as the winner.

The gartic.io APK is available on the app store only. In the app store, it has a rating of 3.8 out of 5. This game allows creating room also so that you can play with your friends by sharing a link. The maximum number of friends you can invite at a time is 50.

Drawasurus is a drawing and guessing game for phone, tablet, or PC. It is one of the best skribbl.io alternative games. This game is available in the Spanish language also.

The user interface of this game is similar to skribbl.io as you need to choose one nickname and start the game. All the procedure for playing is the same. Get on the website, select a name, and start the game of guessing and drawing.

Krunker.io is a video game of the first-person shooter. The game aims to gain points by killing other players. You win the game by getting the most points. Several game modes exist, such as Free-For-All and Team Deathmatch.

Players with different weapons will select from many different types, such as the Triggerman, Tracker, and Detective types. The games are set in various maps. The game may not be having the same ideology of scribble.io, but from a different perspective, both the game allows the user to get attached and engage themselves in the game.

Agar.io is a massively multiplayer online fighting game created by Matheus Valadares, a Brazilian developer. In a map depicting a Petri dish, players control one or more cells. The goal is to acquire as much mass as possible by eating agar (a jelly-like substance) and cells smaller than the cell of the player while ignoring bigger ones that can consume the cells of the player.

The player begins with a single cell, but if it reaches an appropriate mass, players can divide a cell into two, allowing them to control several cells. It brings the same vibe of happiness as skribbl.io brings. Ultimately agar.io is a more refreshing skribbl.io alternative.

It is an open multiplayer drawing battle, in which you will be competing with other gamers, and the winner will be decided based on the best drawing.

After drawing your portion, you will have to rate the picture of your opponents too. You need to submit a response stating which opponent of you has the best illustration. It is one of the best alternatives to skribbl.io.

“Never-Have-I-Online.com” is the web edition of the widely recognized “Never Have I Ever” game that is mostly played at parties and with friends together. There will be as many players as you want and there are lots of different types of games out there.

The game resembles “Truth or Dare”-but without the “dares,” There’s a “Never Have …” question asked every round. Any player has to answer the question with “Yes, I never have” or “No, I already have,” so no specifics are being questioned-you don’t have to say anything about the case in which you’ve done that.

You can call a maximum of 15 people from your friend list to play this game with you. This game doesn’t need any registration as they don’t want to hamper your privacy. Overall it is a great game similar to skribbl.io.

Drawize is a free online draw and guessing game or an online Pictionary game, just like skribbl.io. After entering the website, the user needs to choose the nickname and a character avatar.

Then the game will have five rounds. From these five rounds, the maximum scoring candidate will be the winner. The game is available in 7 different languages which include English, Portuguese, German, Italian, French, Croatian and Spanish.

Anyone searching for skribbl.io alternative then Drawize can be a top option for him.

Sketchful.io is a massively free online game for Pictionary IO games. Pictionary’s purpose is easy. One individual gets to pick a word every round and draw it to his best skill. The rest of the players have to guess what the term is as soon as they can remember. There will be a total of 3 rounds.

The game is available in 6 different languages. You can use the gaming website by having a guest account too. You can create a room and invite your friend to join you. Sketchful.io is having the same interface of the game like skribbl.io.

Draw a word, and let others guess what it is. A multiplayer game intended to smile and make friends while drawing together. Once a term is chosen, you can sketch something you can think is the best expresses the word’s visual sense.

This may mean outlining illustrations for one or more items. You’ll get a few terms categorized as simple, mild, and challenging. The tougher the word you chose to draw, the more coins the other player wins for correctly guessing it.

Drawing and guessing are now not only comfortable but also exciting, as you are facing other humans as an opponent. Drawesome will be categorized in the best similar games like skribbl.io without any hesitation.

Nirmala is a dedicated blogger who has been in the Blogosphere since 2012. She is a tech freak and thus she loves to write about the innovative matters of technology.
Previous HostArmada Hosting Review – Best Managed Cloud Hosting For Small Businesses
Next 5 Amazing Board Games Like Clue To Play With Your Family