Interesting Things You Should Know About Clash Of Clans

Clash of Clans aka CoC has transformed itself into an addiction rather than just a game people occasionally play to have fun. You may be a person who stays up all night just to attack and beat another clan.

Even though being an avid CoC player, you may not have many things about the game, which I am going to reveal in this article. You will feel joyous during the playing session if these things pop into your mind.

Interesting Things You Didn’t Know About Clash Of Clans

We all know how it feels as we go through a tremendous game play session, especially CoC. I bet, not many of you know the following amazing things about Clash of Clans. 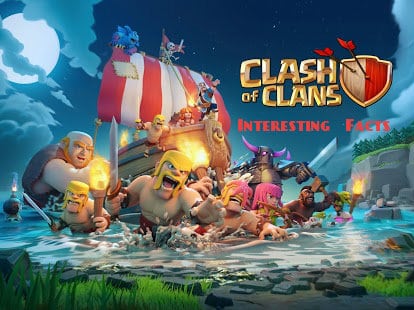 You might have noticed the advertisements that come up as you play the game and the opportunities you are given to increase your coins. In reality, they all increase the revenue of the parent company of the game, Supercell.

In an early assessment done back in February 2015, the game brought them $5 million dollars a day! You can’t even imagine within a blink that how much they make a month and a year. Of course, Clash of Clans is one of the most earning mobile games ever released.

I know you are a crazy player who even sacrifices showers and sleep for the game. But how crazy can you be?

One of the top ranked players named George Rao once simultaneously played the game on five iPads! Yeah, he didn’t even take a break and brought the device into his bathroom during the shower as well.

Do you want to be him? But I recommend you shouldn’t!

Have you ever thought how games remain free to play given the effort the developers take to make such graphic intensive apps live? You have already read the answer; ads and in-app purchases (like coins).

As far as most of the games (including CoC) are concerned, about 50% of the income comes from the top 10 percent of the players. When it comes about Clash of Clans, they spend massive amount every month to keep their village on top of others.

Not only is CoC one of the most earning games, but a most played one too. As of now, it has about 29.5 million active users. No wonder they are earning way too much!

Given that the game has become addictive and the number of people installing it is being increased, we can only expect the number to go up.

We expect such a popular game to have tons of people working behind. No, but that’s not the case here in the case of Clash of Clans.

The company Supercell has about 150 people working on their project. Still, Clash of Clans team consists of only 15 members. Can you believe it? VentureBeat released this shocking news once.

6. Asks You To Take A Break

Game addiction leads to longer playing sessions, thereby increasing strain to our eyes. Most of the games don’t show any sign for you to be aware of how long you have been playing.

On the contrary, Clash of Clans notifies you to take a break if a single stretch of gaming session lasts more than 6 hours. Are you going to try it? Of course, you are!

You might have come across the character P.E.K.K.A. Supercell, in 2012, held a contest on Facebook to find the name of the new character.

The name P.E.K.K.A. got the most number of votes and hence became the name. P.E.K.K.A. is the acronym of Perfect Engaged Knight Killer of Assassins. Interestingly, nobody knows whether it is male or female. Even though some players say it has no gender, I have seen Clash of Clans notifications specifying it with the name ‘her.’

8. Balloons Are Susceptible To Air Attacks

We use balloons to untie an air attack and get an edge during the war. But not many know that balloons themselves are susceptible to air attacks, and they can’t withstand that from happening.

So, you must be cautious about the attack and the strategies the enemies are going to use. Otherwise, an unplanned attack may cost you the loss of balloons.

It is an undeniable fact that P.E.K.K.A. is an amazing war machine with the capacity to carry on with a massive attack. But P.E.K.K.A. is prone to hidden teslas that the later can double-damage the former.

Whenever you set out for war or defending your clan, you have to be warned about this seldom-known fact.

10. Only Two Characters Change Their Appearance

Have you noticed the change in the appearance of a dragon at every step? Yeah, it changes the appearance, and due to the immersive effect of the game, you might not even notice that too.

Along with Dragon, P.E.K.K.A. also changes its appearance in every stage.

11. Army Camps Are Functional During Upgrades

Unlike some other items on Clash of Clans, Army Camps stay fully functional even when you upgrade it.

In short, you can use them as an immediate need comes up.

You have got plenty of lesser knows Clash of Clans facts now, I guess.

Gameplay increases your reflexive actions and hand-eye coordination. Still, I recommend you to have an offline social life as much as you play the game.

In case you know any other interesting things about CoC, don’t forget to leave a comment down below so that, we all can be aware of them.

Install Clash Of Clans For Android

You can play Clash Of Clans on PC as well!

Nirmala is a dedicated blogger who has been in the Blogosphere since 2012. She is a tech freak and thus she loves to write about the innovative matters of technology.
Previous Best List Of Cartoon Photo Maker Software
Next How To Remove Clash Of Clans Account Permanently?